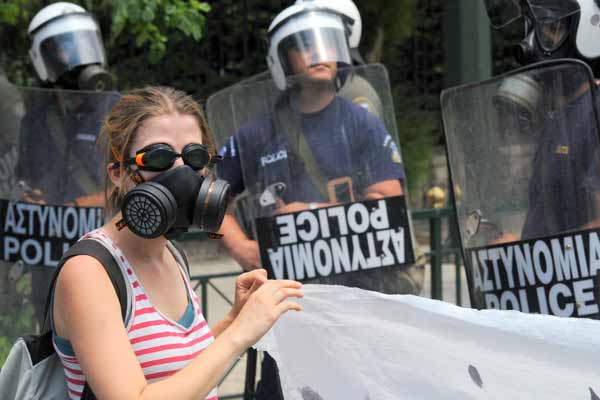 Greece has been prominent in the news for all the wrong reasons for a year or two. But whether you need to typeset an instruction manual or a protest banner (!), there are some issues in Greek typesetting to be aware of.

First the good news: there are very few font or composition problems associated with typesetting Greek. Greek text keyed in Unicode (and it really should not be in anything else these days) will work in a good range of fonts. You can use Arial or Geneva straight off, or buy a professional font from a wide range such as those offered by Linotype.

In general, French-style “guillemets” are preferred although English style double quotes can be used for secondary quote marks, as shown by point 10.1.17 of this EU Greek style guide (in Greek). Set your language to Greek in InDesign to get these guillemets automatically as you type. English-style single quotes should be avoided, especially as they could be mistaken for an accent before a capital letter.

Greek typesetting will tend to run longer than English. If possible, allow for this when designing a document in English which will also be typeset in Greek. As so often with foreign language typesetting, safe design options include having some white space that can be eaten into, filler pictures that be sacrificed or setting the English with a generous point size and leading that can reduced slightly in the Greek version.

When choosing fonts or if you need to type Greek, you will come across “Polytonic” and “Monotonic”. Polytonic Greek uses multiple diacritic marks, and so can be used for Ancient Greek as well as Modern. Monotonic uses a single diacritic, making it only suitable for Modern Greek. So, the good news is anyone working on a document for Greece today does not need to worry about any of this! If you specifically need to typeset Ancient Greek, then I recommend reading a Microsoft guide to Polytonic Greek [.doc] and this guide to using the keyboard on the Mac [.pdf].

Picture this: after proofreading, with the print deadline looming, your client suddenly decides their document’s headlines need to be in all caps. After a quick style sheet change, you send the job off to print confident in a job well done … only for the Greek office to come back saying the text they had signed off is now wrong! What’s going on?
The key point for non-Greek speakers to understand is that Greek words are written slightly differently in all caps. To cut a long story short, when writing a word entirely in uppercase you get rid of any accent present in the lowercase form. This used to be tricky (but not impossible) for non-Greek speakers to get right. Luckily these days it’s mostly a question of choosing the right font.

In the example above, I’ve typed a word and then made it all uppercase. In the first column, set in Andale Mono, the uppercase Greek incorrectly maintains the accent on the second letter. In the other two columns, the accent correctly disappears. The great thing here is that you don’t need to type a different character: the font “knows” the accent should not appear. And if you change your mind, and make the word lowercase again, the accent reappears. Magic!

So far, so good; but there is a further complication. Sometimes an accent appears on one of a pair of vowels (meaning they should be pronounced separately rather than combined). In this case, the diacritic as it appears in the lowercase word may well need to be removed and a different diacritic inserted.

In the example above, Garamond Premier Pro is again doing a good job removing the accent. But Arno Pro has done a great job on the capitalisation removing the tonos but then inserting a dialytika. See what the result is with your intended Greek typesetting by copying and pasting my example word – ρωμέικα – and then applying uppercase.

It’s worth noting that this accent removal only applies to words being written all in upper case, not to capital letters at the beginning of a word. For a brilliant (but detailed) example of the sort of work font designers put into this kind of thing, read this Typophile thread on “Greek All Caps”

“Knowledge is the food of the soul” wrote Plato: which seems appropriate to a post about Greek typesetting. So if you have questions, feel free to ask!

1 thought on “Greek typesetting without the tears”

Add blog to our directory.